A friend of the family has an elderly Mother who is still living alone but has early onset Alzheimers. She now needs to be reminded when to take her normal medication but often forgets  the time of day and what she should be doing. Thus we need a device that cycles through the significant events of the day with pictures, prompts and time of day.

His suggestion was to use something like a Digital Photo frame  and have a Reminder application running on it. Such commercially available frames are reasonably priced (Around EUR80) but, unfortunately, they are low capability and are generally running some kind of RISC chip with specialised firmware rather than a generic OS. Thus, to replace the functionality you would have to flash a new Firmware. The cost saving is outweighed by the effort involved in developing to the platform.

You would not use something like a Kindle, Android or Apple Tablet for this application as you will find that the target user would get confused by the other things that the device does and also by the accidental triggering of other functions via inadvertently pressing the other buttons. My Mother was once given a Kindle but just by holding it with her arthritic fingers she would accidentally touch the various buttons on the side or she would point it at the light and the screen would rotate. They are just too generic and too complicated.

Enter the Chumby (http://www.chumby.com/). I have owned an early Chumby Classic (http://www.chumby.com/pages/chumby_classic) for some time now and have been waiting to find an application for it. It is an open Hardware, OS, Software platform developed by Chumby Industries in San Diego, CA. It is a networked (WiFi) ARM based device, running Linux and has a small touch screen with tilt sensors and a few pressure switches on the case. It has two USB ports, Speaker, headphone socket and built in microphone. It runs Flash widgets loaded from the Chumby site. It doesn't hide its internals for those who know (You can easily gain root ssh access) yet still provides an easily configurable and secure user experience - a hard thing to get right.

Overall a great device well designed, with great infrastructure behind it. A big, Thumbs Up to the Chumby guys for their early innovation in this space that is now filled with many ARM based linux devices including Android devices, Arduino (http://www.arduino.cc/) and lately Raspberry Pi (http://www.raspberrypi.org/).

The cream on the top - and this is what makes this device ideal for this application - is that there are hooks in the boot process that allow you to configure and even replace the standard chumby console. Its as simple as creating a .swf application, loading it onto a root of a USB Stick or Flash memory card (For the later devices) using the name "controlpanel.swf". The device will then boot and only run your application.

Here is a little video of it running on my Chumby 8 in test mode.

As I say, an early prototype but it displays the basic idea. Note - it is running in test mode so the schedule is not running true time - it is just ticking every minute to start with then I trigger the changes myself by touching the screen.

The Schedule for this example is here: http://www.cregganna.com/ReminderApp/ReminderSchedule.xml


Going beyond a Prototype

The best target device would seem to be the Insignia Infocast 8 or Chumby 8 (which I think is no longer produced) as it is an 8 inch frame with a memory card slot.

Improvements and moving it forward to a fully usable application would possibly include:

To use the application one would have to: 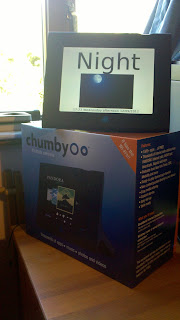 Interestingly this proved hard to implement. There was lots of rubbish implementations on the internet using timers and the like so here is the implementation I put together base on MovieClip.scollRect.